A Lifetime of HappiNES: Transitions & States

Last time we added some music and sound effects to our title screen. Let’s add in some placeholders for the level and credits screens so we can put the rest of our music where it belongs.

Until now we’ve just had a single state for our game: the title screen. Our game will have very little state to track, so let’s go with a simple enumeration:

For each state, we’ll need an Init function to draw its appropriate background and play its song, e.g.:

Let’s whip up some very basic placeholder backgrounds in NESst using the same CHR tiles as our title screen:

Once we’ve exported and created our header files for these backgrounds, all that’s left is handling the transition when a player presses Start.

Now that we have our screens with music, let’s make them more interesting.

The pattern table that contains the tiles for our title screen is starting to get pretty full: 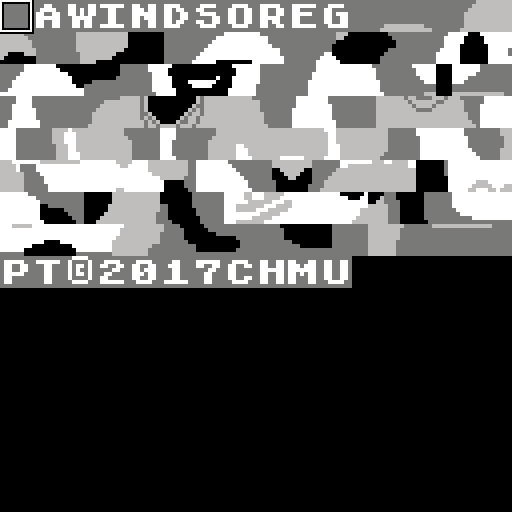 Luckily, we have a second pattern table that’s completely empty thus far. We have to consider, though, that we’ll be sharing it between both the level and credits screens. The easiest way to do this is to create one image that will contain all the tiles we need for both screens (both backgrounds and sprites) and run it through makechr all together.

For both screens, we’ll need some characters from the same font we used on the title screen, so we’ll just throw in the whole alphabet and some common punctuation. For the level screen, we’ll want a border, some sprites for Elizabeth and Philip, and a ring. For the credits screen, we can re-use the same border and sprites, but let’s add a silhouette of the crown for flair. After resizing and manual touch-ups to get everything within NES PPU restrictions, we have something like this: 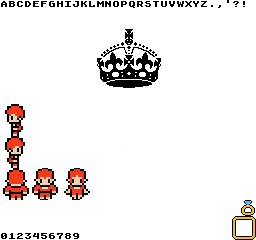 Now we can run this through makechr and add the CHR data onto the second half of our existing CHR file:

makechr is a great tool, but it’s not always perfect, so some tiles that are intended to be used in the same palette may be generated with the colors swapped around. With a little bit of manual touchup in NESst or YY-CHR, we should have something like this: 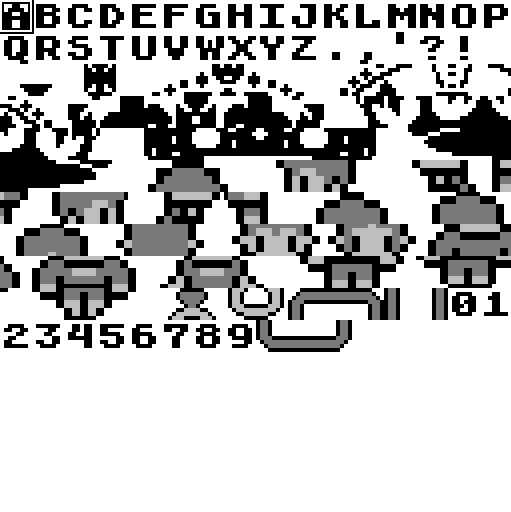 Unlike before where we just used makechr’s nametable and attribute output to create our nametable, attribute, and palette data, we have to open up NESst and manually create our backgrounds by placing tiles where we want them and tweaking the palettes. For the crown I did cheat and use makechr’s output as a starting point because I did not want to re-assemble the crown puzzle. 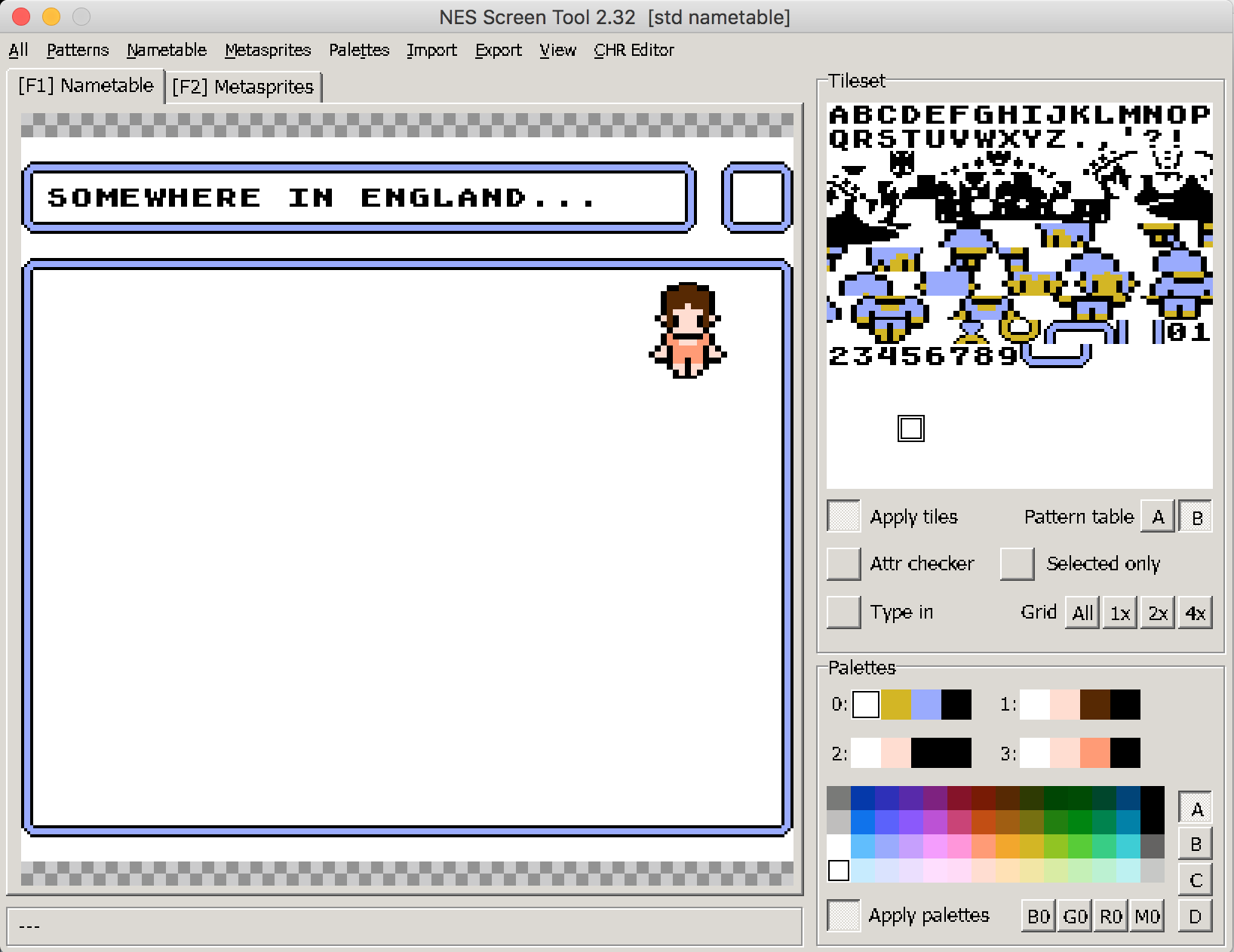 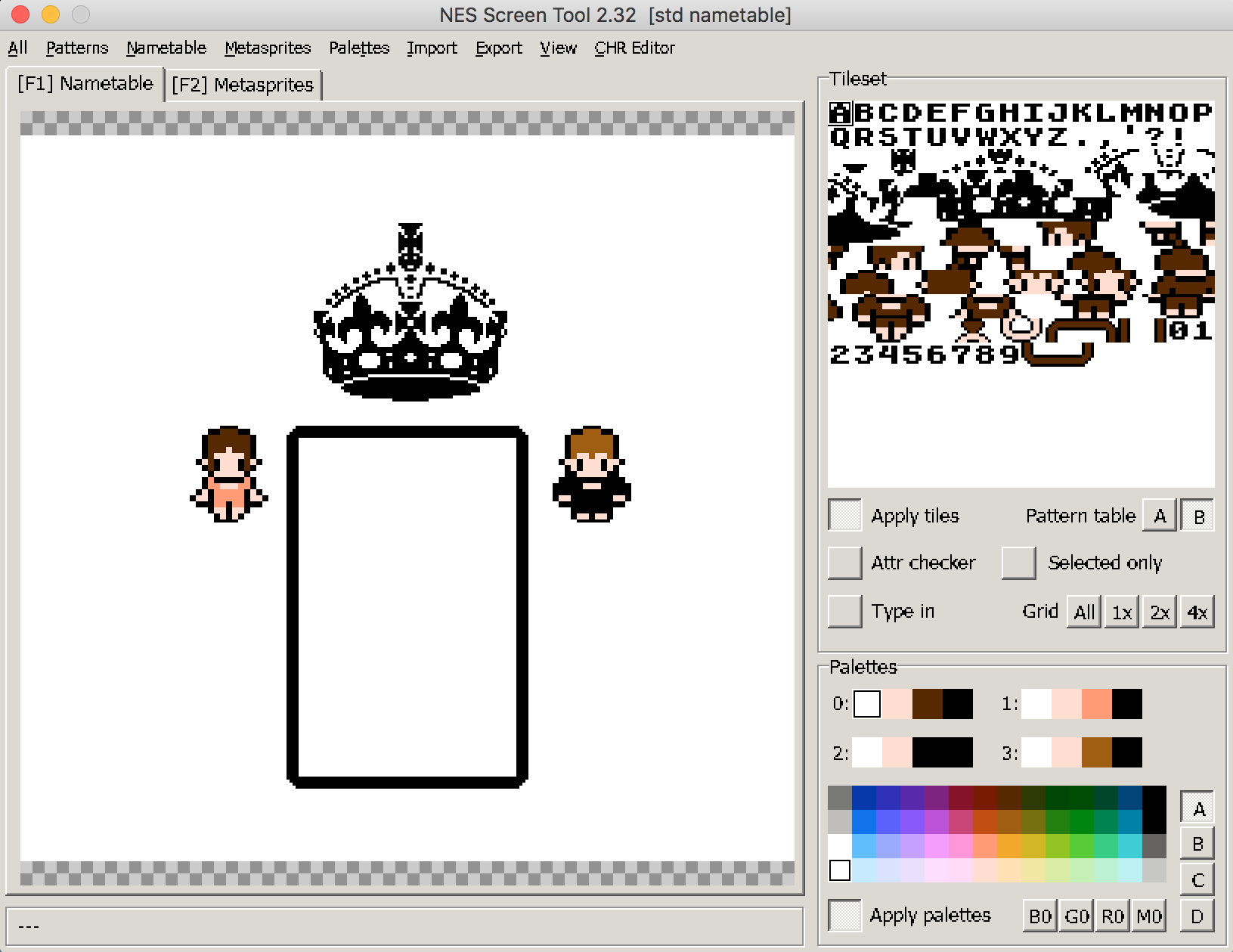 Now just export the palette and RLE’d nametable data as before and our placeholders have been replaced by colorful backgrounds, except the screen appears to be filled with garbage: 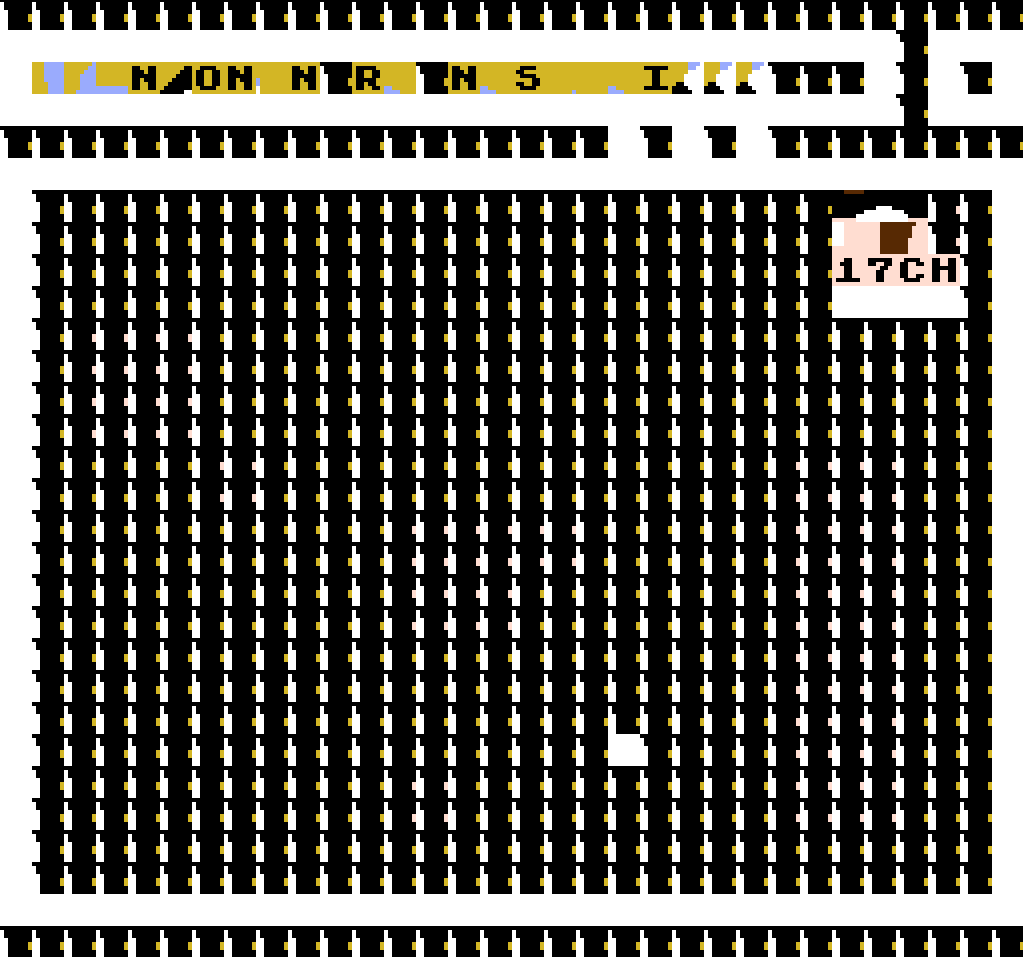 This is because the PPU still thinks we’re still using pattern table 0 and is using tiles from the title screen. Since we’re disabling and re-enabling the PPU for each state transition, this is a good time to tell the PPU which pattern table we want to use.

And now our backgrounds should render correctly on all screens! That’s all for now, but next time we’ll finish up the level screen with sprites, collisions, and inventory.